A solid–liquid mixture consists of solid and liquid matter, such as a mixture of sand and water or a mixture of salt and water. Mixing in solid–liquid systems is used for dispersing agglomerates, keeping the solid particles in suspension, blending various solid particles and colloids in a liquid, or blending two liquids as in the case of paints and foods. In many cases, the lack of capabilities to manage these processes causes unexpected results, which are accepted as a normative situation; hence, a statement like “chemical processes are an art” is a typical concept. Large-scale axial turbulent fluctuations distribute suspended solids throughout a liquid volume by offsetting their settling or flotation in a mixing tank. The maximum resulting non-uniformity of local solids concentration is uniquely determined by the Peclet number, Pe = KV/W, and decreases with a decrease in this number. Here, V is solids settling or flotation velocity, W is impeller tip velocity, and K is a dimensionless coefficient determined by tank geometry. Random upward turbulent fluctuations of sufficiently high intensity picks up solids by offsetting their gravitational settling to the tank bottom and preventing the accumulation of solids there. To scale solids pick-up, the process must maintain geometric similarity of tank hardware dimensions and the same relevant physical properties and process characteristics, select liquid depth proportional to tank size, and select impeller rpm to maintain the same intensity of turbulent fluctuations by keeping either the same mean energy dissipation rate for a BAFFLED TANK, or the same impeller tip velocity for an UNBAFFLED TANK. In this article, we discuss these problems and the ability to reduce them by using the right program to manage them. The case study examines reactive acid–base crystallization in the Active Pharmaceutical Ingredient (API) involving an organic acid with an inorganic base (NaOH); both solids are in ethyl acetate solvent in the last step in order to obtain a final product before the solid treatment.

Figure: Reactive acid–base crystallization in the API industry. The reaction that generated the impurity was the hydrolysis of the solvent with the base. As a result of this impurity, the final product was outside specifications (Table 2). The problem was that failures were detected during scale-up. An additional problem arose when we shifted the processes to a second system (at the same scale), resulting in an approximately three-fold rise in impurity. The task was to eliminate the rise in impurity during scale-up study. The traditional approach is to try to achieve better homogeneity of solid distribution with each new system. Table 2: Production Results

% RJ: Percentage of rejected batches The mixing analysis was a surprise. The radial distribution of solids in the reactor, where the purity was acceptable, was less homogeneous than it was in the unsuccessful reactor. Solid–liquid distribution analysis found that the fast reaction was between the solvent and the base, and when homogeneity is higher there is a rise in impurity. 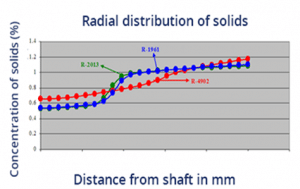 Figure: Mixing distribution of solids. After multiple simulation scenarios, it was proven that it is not possible to reach acceptable conditions in the scale-up system and maintain the required impurity level of the product. To achieve satisfactory results, the NaOH needed to be added as a solution. The results reveal that homogeneity of solids is a not always an esthetic process. “Esthetic mixing” has high velocity, homogeneity and high shear rate so if you scale-up by a factor of four you achieve a four-fold increase in productivity. Mixing consideration helped identify and implement a new way of thinking about improving the continuous process in the production step. Since then, every time we begin a new process, we first evaluate the mixing calculation results. This study is based in one basic hypothesis. The transfer of technology from the laboratory to production or from site to site in the process industry should take in consideration the change of the environment caused by the flow characterization. If the mechanism of the flow and mixing parameters are taken into consideration during the technology transfer activities, then it will be possible to avoid surprises in the performance of the process as measured by the quality of the products at every stage, the difficulties encountered, and the yield. Once the flow is characterized, it is then possible to raise relevant questions that connect between the process and the equipment to be used to manufacture our materials. This will focus the study on the main question at hand, allowing them to design the set of experiments required to understand the process.
VisiMix Video