Hydrodynamics in stirred vessels can be classified as laminar or turbulent. VisiMix utilizes two sets of tools: one devoted to laminar mixing and a couple of them devoted to turbulent mixing. The hydrodynamic parameter used to describe whether the mixing is laminar or turbulent depends on the fluid properties: density ρ, viscosity μ, and also a characteristic fluid velocity in the vessel and depends on the characteristic length scale of equipment.

One should pay attention to the consequences of laminar or turbulent mixing as these mixing mechanisms are different and the equipment requirements also differ. Most of us spend some time in the kitchen preparing various food recipes. Imagine the following cases involving mixing: preparing a drink of rum and coke, sweetening tea and coffee with honey or granular sugar, making salad dressing using oil and vinegar, or preparing bread dough, flour, and water. We can mix these using a variety of methods: a straw to stir your rum and coke, and a spoon to stir your coffee. When you add the honey or the granular sugar to dissolve, the spoon distributes them until blending in uniform and the first sip is as sweet as the last sip.

The key point here is that in each of the cases above we use the word “mix” or “stir”; however, it is very obvious that we are dealing with totally different processes. It is important that we focus on the desired process outcome when describing mixing. For example: when preparing a salad dressing, your goal is to distribute the oil into the vinegar, whereas in the rum and coke we are blending two miscible liquids.

When we are sweetening tea or coffee with granular sugar, we are actually changing a face of the solid regular sugar by dissolving and then blending into the tea to make uniformly distributed sweetness; in making salad dressing, we are creating droplets of one fluid and another; in making bread dough, we are actually wetting the particles and swirling them somehow and then mixing in to prepare the dough.

These phenomena are all very different; thus, when we say we are “mixing” we lose some very important message, concept, or aspect of this phenomena.

When conducting R&D or using a scale-up methodology, you need to pay attention not only to physical properties (phases, densities, viscosities, and rheology), chemistry (chemical equilibria and chemical kinetics) but also the transport phenomena (hydrodynamics/mixing, mass transfer, heat transfer). A lack of attention in these matters could hurt the success of the mixing process.

Answer: Yes, VisiMix covers the mixing of solids, the dispersion of solids in liquid, and more. For high-shear mixing devices, you can use the program “VisiMix RSDE.” This is a unique software program for mathematical modeling and technical calculations of installations with high-shear devices, e.g., rotor/stator and tooth disk homogenizers. 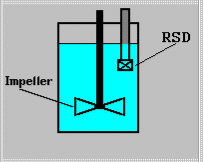 Question: With regard to dissolving polymers in solvents for chemical recycling, would you recommend VisiMix or another modeling approaches?

Answer: Any tool has limitations. VisiMix will handle the solid distribution in the liquid for the polymer and will give you some information about the shear stresses on the surface of the particles. However, it does not tell you whether that is sufficient to keep the particles from sticking to each other or not; for that you have to do some experimentation to find out.

This article is based on Dr. Victor Atiemo-Obeng’s lecture on VisiMix Forum.